Traditional Chinese painting of Go-Hua is considered to be close in spirit and the tools used to calligraphy.
In China, as a carrier of color used ink tiles, which are ground with water to the desired consistency, as well as water paints with mineral and vegetable pigments.
As the basis of the picture used silk, cotton fabric, sometimes paper. For the spraying of paints use brush from bamboo and wool household or wild animals.
The color scheme of traditional Chinese painting is laconic and consists of three or four restrained colors, rich tonal transitions of one color, usually the color of black ink. The white color of the sheet or fabric creates a conditional airspace and is the actual color, not the emptiness of an unpainted field. END_OF_DOCUMENT_TOKEN_TO_BE_REPLACED

In the XVII century, a thematic or story picture was attributed to the high genre (grand genre) and called the genre.
The high genre included: allegorical, battle, epic, household, historical, mythological and religious genres.
In recent years, in Russia the concept of thematic picture is increasingly replaced by the term figurative.
Figurative began to be called not only the plot composition, but all the works, which depict human figures.

Figurative painting in the allegorical genre Allegorical genre (from Greek. allegoria-allegory) – a genre of fine art, in which a work of art is laid hidden and secret meaning. In this genre, ideas that are difficult to depict (for example, goodness, strength, power, justice, love, etc.) are shown allegorically through images of living beings, animals or human figures with attributes that historically have a symbolic, easy-to-read meaning. END_OF_DOCUMENT_TOKEN_TO_BE_REPLACED

GENRES IN THE VISUAL ARTS

Works of fine art, mainly painting, are divided into genres.
Depending on the subject image in the seventeenth century, the genres were divided into “high” (grand genre) and “low” genre (petit genre). The” high “genre included the historical genre: battle, allegorical, religious and mythological; the” low ” – scenes from everyday life: portrait, landscape, still life, animalism.
Having become a form of representation of life, the genres of painting are not immutable, they develop together with life, changing with the development of art. Some genres die or acquire a new meaning (for example, Vanitas, Capriccio and Veduta), there are new, usually within the pre-existing (for example, within the landscape genre appeared cityscape, seascape and interior), and some are combined (now Nude, household, historical, mythological, allegorical, religious and battle genre is often replaced by the term figurative). END_OF_DOCUMENT_TOKEN_TO_BE_REPLACED

STYLES AND TRENDS IN THE VISUAL ARTS

Abstractionism (from lat. abstractio-removal, distraction) – art direction, refused to approximate the reality of the image of forms in painting and sculpture. One of the goals of abstractionism is to achieve harmony, to create certain color combinations and geometric shapes to evoke a variety of associations in the beholder. The main representatives of abstractionism were: Wassily Kandinsky (1866-1944), Pablo Picasso (1881-1973).
Abstract impressionism-the direction of abstract art in which free abstract compositions are created by a large stroke. The meaning of the image was to reflect the psychological state of the artist and his character.
Masters of abstract impressionism: Jackson Polok, mark Rothko, Willem de Kooning, Franz Kline, Lee Krasner
Abstract expressionism (from the English. abstract expressionism) – the direction of abstract art in which free compositions are created by a large, impulsive brushstroke. END_OF_DOCUMENT_TOKEN_TO_BE_REPLACED 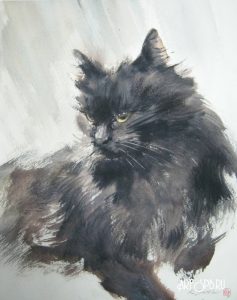 Watercolor (from Italia. aquarello) means painting with water based paints.

There are several varieties of watercolor techniques:

dry-painting on dry paper, with drying each layer of paint before applying the next
wet, wet watercolor, Alla prima-painting on raw paper

Watercolor paintings
Watercolor in the technique of Alla prima END_OF_DOCUMENT_TOKEN_TO_BE_REPLACED