What is special about the landscapes that are called the most Italian: Veduta and Capriccio 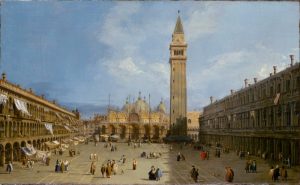 History did not preserve the name of the tourist that the first one wanted to take away from Italy a picturesque “postcard” in memory of the trip and thereby laid the foundation for a whole direction in the visual arts. However, it is unlikely that such a lover of beauty was the only one – this country in the south of Europe would sooner or later seduce connoisseurs with its landscapes immortalized on canvas.

Translated from Italian, “Veduta” means “view”. This is a picture, drawing or engraving, which details the city landscape. In fact, Veduta is the prototype of photography, the golden rule of this genre is great accuracy. Therefore, the one who ordered the artist a city landscape really took home the memories of his journey.

The origins of this genre should be sought from the “small Dutch” – it was the Dutch artists of the 17th century who instilled in Europeans an interest in images of cities that had not received much attention before. Paintings on biblical and historical subjects were considered the “high” style in painting, and the landscape, including the urban one, acted only as a background, a “view from the window.” One of the first paintings in the genre of Vedut and, without a doubt, one of the most famous, was “View of Delft” by Jan Vermeer in 1661.

With the development of painting techniques, with the perfecting of perspective skills, artists began to increasingly turn to the image of nature and generally any locality, so a new independent genre appeared – landscape, and with it one of its variations – urban landscape, or Vedut. The latter became the main direction of creativity for many talented artists of the XVII century – such as Giovanni Antonio Canal, or Canaletto, Bernardo Bellotto, Francesco Guardi, Giovanni Paolo Panini. All of them were craftsmen who worked in Italy in the 18th century – it was then that the Veduta reached an unprecedented peak there as a genre of fine art.

Of course, one of the most picturesque Italian cities in those days, as, indeed, even now, was Venice, so it is not surprising that on its streets and embankments more often than in other parts of the country, one could meet a landscape painter-Vedutian artist. Canaletto, considered the greatest master of Veduta, was also an innovator in the technique of creating a landscape – at first he used to make pencil sketches.

The work of artists in the open air became simpler and more convenient after the appearance in 1841 of a tin tube for oil paints, the American artist John Rand became the inventor. But in the 19th century, interest in the genre began to fade – this was due to both the armed and military conflicts that flared up on the Apennine Peninsula, and to new trends in painting and art in general, where modernity gradually came to the fore.

A similar genre, but still a different genre of landscape – capriccio – appeared as an artistic way of expressing the artist’s fantasies – in fact, this is also clear from the name, “capriccio” in Italian – “caprice, quirk”. So in 1617 – “Capricci” – called his series of etchings by the French artist Jacques Callot. And Francisco Goya released his Capriccios in 1799. But in the history of art, this term is still quite different.

Capriccio is a landscape in which the artist depicts the ruins of ancient temples and other structures – both real and fictional. It is not surprising that the capriccio also awaited the greatest recognition in Italy, primarily due to the huge number of ancient Roman ruins and traces of ancient art throughout the country. In addition, in the XVIII century Europe after the discovery of the cities of Pompeii and Herculaneum, who died as a result of the eruption of Vesuvius in 79, interest in antiquities was incredibly great.

The works performed in this genre were surprisingly in demand, and it was much easier for artists to get an order from a wealthy tourist who loves antiquity than to look for buyers for genre and historical paintings. In the capriccio paintings, the master’s striving for perfection was embodied – it did not matter how reliably depicted on the canvas. For greater effect, staffing was added – small figures of people and animals; it happened that they were depicted not by the landscape painters themselves, but by other artists.

Secrets of the Four SeasonsThis year marks almost 430 years since the death of Giuseppe Arcimboldo, an Italian artist known for his original portraits of fruits, vegetables, flowers and fish. Giuseppe so skillfully portrayed…