How Pavel Tretyakov competed with the emperor 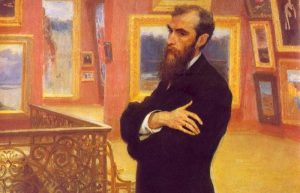 Before the revolution, patronage of the arts was considered not only charitable, but also beneficial for the donor himself, and the point here was not taxes at all. According to the ideas of merchants in the old days, this activity avoided the terrible temptation – the power of money. Most often, wealthy industrialists became patrons of shelters, hospitals, and educational institutions. At first, the partners and competitors laughed at the Tretyakov brothers’ passion for painting, but time, of course, put everything in its place.

Pavel and Sergey Tretyakov were the eldest children in a well-known merchant family. This dynasty of industrialists has flourished since the 18th century, and for several generations from the retail of buttons, it has been able to grow to manufacturers – the family owned paper dyeing and finishing industries. I must say that, despite the huge investment in art, by the time of his death, the state of Pavel Tretyakov was estimated at 3.8 million rubles.

Merchant children had not been spoiled before. Getting a home education, both boys from an early age began to help the elders in business, and in the most dirty job: they cleaned the shops, invited customers, performed small assignments and gradually began to study accounting. By the age of 20, young people could already be full-fledged family business leaders. I must say that the brothers until the end of their lives were an example of excellent family relationships, which joint business management did not destroy, but only strengthened. They did not share family finances, investing money in one or another enterprise. In tastes and preferences, they were also close – both at some point became interested in collecting paintings, but if Pavel Mikhailovich dwelt on the works of Russian artists, then Sergei Mikhailovich collected canvases by Western artists. The collections of the two brothers came together at the time of the transfer of the paintings to the city.

It is believed that the love of Pavel Tretyakov for art began in childhood. As a young man, he began to collect inexpensive miniatures, prints and lithographs, buying them up in the market and in shops. Then, visiting St. Petersburg in 1852 and seeing the true masterpieces of painting, I realized that it was only necessary to spend energy and money on real art. Delighted, he wrote to his mother:

“I saw several thousand paintings! Pictures of great artists … Raphael, Rubens, Vanderwerf, Poussin, Murill, S. Rosa and so on. and so on. I saw countless statues and busts! I saw hundreds of tables, vases, other sculptural things from such stones, which I had not even known about before. ”

At the age of 24, Pavel Mikhailovich bought the first paintings, which are believed to have laid the foundation for the future collection. These were fairly average works: The Temptation by N. G. Schilder and The Clash with Finnish Smugglers by V. G. Khudyakov. However, choosing them, the future founder of the art gallery was guided not by fashion or the opinion of critics, but only by his own taste. This will continue to be his main policy in the formation of the meeting. A similar principle for another person could lead to a complete collapse and waste of money on a mediocre daub, but Tretyakov showed an excellent flair in this matter, surprising to the layman. Playing by his own rules, he was able to become for Russia not only a collector, but also a philanthropist, discoverer of new stars, who supported many young artists. Especially fascinated by his realistic and truthful work of the “Wanderers.” After the first exhibition, Pavel Mikhailovich bought Savrasov’s landscape “The Rooks Have Arrived,” and in subsequent years the works of Kramskoy, Myasoedov, Ge, Petrov, Levitan, Repin, Surikov, Shishkin, Vasnetsov and many other painters became the basis of his new collection.

In addition to the authors’ choice, the collection formation strategy was unusual for its time. Tretyakov was the first to buy not only paintings, but also sketches for them. Previously, this priceless material was considered waste and usually dusted in workshops until it got lost. In addition, he bought paintings in bulk from many artists. So, for example, in 1874 from Vasily Vereshchagin, he immediately acquired 144 paintings with sketches and 127 pencil drawings. Alexander Ivanov has 80 works. After a trip to the Middle East, Vasily Palenov, a collector bought 102 sketches from the artist. This approach made it possible to form a collection on a full scale, showing contemporary art to the fullest. A little later, the Tretyakov began to specially order artists landscapes and portraits of prominent contemporaries (with such requests he turned to Kramsky, Perov, Serov, Repin)