The family of artists da Vezzo: How the artist was destined for an early death, and her husband – fame and a new marriage 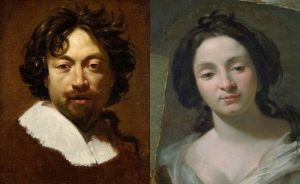 The happiness of family life and the happiness of self-realization in one’s beloved business are eternal values ​​that existed back in the days of the Ottoman sultans and musketeer swords. True, what has become the norm in the modern world was once a rarity and a great success. Simon and Virginia Vue worked side by side, helping each other in creativity and at the same time enjoying family happiness – and this is an example as beautiful as short-lived.

Simon Vue and his steps to success

The fate and vocation of Simon Vue lined up quite predictably. He was born into the family of an artist, not simple, but close to the French royal court. His father, Laurent Vouet, gave Simon the necessary skills, and the further development of the boy’s art determined his talent and passion for development. Already in his teens, he independently and at a very high level performed custom-made portraits.

The determining factor in the work of Vouet was the journey that he embarked on in 1611. First, as part of the retinue of the French embassy, ​​he went to Constantinople to the court of the Ottoman sultan. The East brought the artist an impression of beautiful fabrics of different shades and textures – and since then, masterpieces of draperies in paintings, “aesthetics of fabrics”, will be the hallmarks of Vouet’s works. In 1612, Simon settled in Venice, where he studied the work of the masters of that time – Titian, Veronese, Tintoretto.

Two years later, the artist ended up in Rome, where he lived for more than ten years. There, Vouet worked in a style that would later be called “dark” – according to the influence on the Frenchman’s work of Caravaggio, with typical illuminated figures typical of the latter against a darkened monophonic background. In Rome, Vouet taught painting, having occupied a high post at the Academy of St. Luke, and it was in this city that he met his future wife Virginia.

The girl who dreamed of being an artist

Virginia da Vezzo was born in 1606 in the city of Velletri near Rome. And she was destined to live the simple life of an Italian woman of the 17th century if her father, Pompeo da Vezzo, did not discern in the girl a talent for drawing, as well as a penchant for art, a willingness to learn, which Virginia showed from childhood. And so the whole family moved to Rome, where in the early twenties the young artist was arranged as a student of an experienced master, who turned out to be Simon Vouet.

Apparently, Virginia was an interesting and extraordinary girl, she was distinguished not only by hard work, but also by her artistic taste, she knew how to think brightly and vividly, she made friends with prominent personalities of her time. Among them, Artemisia Gentileschi, the artist who became the first female member of the oldest Academy of Fine Arts in Europe in Florence, became the most distinguished artist. The influence of Gentileschi on the works of Virginia was also traced after the departure of da Vezzo from Italy: the works of the biblical story about Judith and Holoferne became outstanding works of both artists.

Virginia was given a rare honor for women of that time – membership in the Academy of St. Luke. In addition, the young artist was a model and assistant to Vouet, and after a while became his bride. In 1626, Simon and Virginia got married, and in 1627, by order of King Louis XIII, Vouet returned to Paris. Virginia followed her husband.

In France, Vouet brought the style of Italian Baroque, which was very well received. Simon Vouet was doing very well – he painted the royal palaces, the residences of Cardinal Richelieu, carried out orders to decorate the houses of noble Parisians. Virginia helped him in his work – as, however, and vice versa – and often the paintings, made apparently by his wife, were attributed to him after some involvement of her husband. In addition, the work style of the spouses was very similar. Art historians are convinced that the artist’s contribution to the work of her famous spouse, as well as the share of her own works in Vue’s legacy, were very significant.

Scientists can only build versions as to which works really belong to the brush of Virginia. Her work recognizes with certainty the painting “Judith with the Head of Holofernes”, on which the artist portrayed herself, and, in the opinion of some art historians, “Danae”. Virginia created then-popular miniature portraits in Rome, painted paintings on historical and mythological subjects.