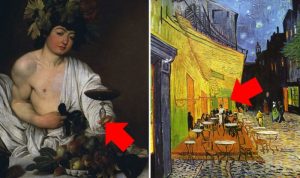 In the old days, when people were forbidden to express their opinions or beliefs publicly (or it was considered rude to publicize their true feelings), paintings and sculptures were a suitable object that the creators used to convey any messages to people. Some of the artists shared such a review with the world about their political convictions and moral views, while others left allegories on religious topics in their canvases. But there were artists in the Renaissance who left the so-called “Easter eggs” for future generations. Today, all these hidden symbols are a subject of study for scientists.

The Last Supper by Leonardo da Vinci is one of the most discussed works of art among conspiracy theorists who regularly find hidden codes in this work. It turns out that The Last Supper is full of secret codes and meanings. Moreover, it will not be a question of cryptograms, which, according to Dan Brown, the author of The Da Vinci Code, keep secrets about the future life of Jesus, and not even about the statements that the mathematical and astrological code is hidden in the picture, which shows the day when the end of the world will begin (March 21, 4006).

Along with all the codes, Leonardo seems to have transmitted music to his descendants in his work. At first glance, there is nothing mysterious in the buns scattered across the table. But nevertheless, a few years ago, Italian computer technician Giovanni Maria Pala found … a score in the picture. The position of the hands and bread can be interpreted as musical notes. And if you read these notes from right to left (Da Vinci often wrote in this way), you get a 40-second composition, which sounds like a requiem. LEARN MORE …

2. Michelangelo, “God Separating Light from Darkness”
One of the most famous works of art by another famous Renaissance artist, Michelangelo, is his huge painting on the ceiling of the Sistine Chapel. This truly gigantic masterpiece is divided into nine segments, and each of them tells a separate story from the Book of Genesis.

Michelangelo was a genius and “true Renaissance man”: an artist, sculptor, architect, and, among other things, a specialist in the field of human anatomy. This became known because of his sculptures, and also because the artist managed to hide several anatomical elements in his paintings. Even in his youth, Michelangelo dissected corpses dug in a cemetery, and during this rather disgusting period of his life, he learned a lot about the human body.

For example, if you carefully look at the fragment entitled “God separating the light from the darkness”, you can see that the neck and chin of God resemble the image of the human brain.

So why did Michelangelo hide the anatomical sketches in his paintings. Most theorists believe that it was Michelangelo’s protest against the church’s refusal to accept scientific facts.

3. Michelangelo, The Creation of Adam

It seems that Michelangelo was fascinated by the human brain. In another popular fragment of his masterpiece on the ceiling of the Sistine Chapel, he inserted another image of the brain. Perhaps everyone saw this picture, known as the “Creation of Adam,” since it is one of the most circulated religious paintings of all time.

A god supported by twelve figures reaches out and barely touches Adam’s hand, passing him the spark of life. Initially, it was believed that the whole composition was only an allegory of the relationship between man and God, but some experts analyzed the picture and noticed that God and twelve figures are depicted against a twisted cloak that closely resembles the structure of the human brain.

This may not be a coincidence, since Michelangelo even managed to portray some of the more complex parts of the brain, such as the cerebellum, optic nerve and pituitary gland.

4. Vincent Van Gogh, “Night Terrace Cafe”
The Cafe Night Terrace is considered one of Van Gogh’s most valuable paintings. The scene depicted on it is quite simple – it’s night and a bunch of people with drinks in a half-empty cafe. But it turns out that the picture is hidden more than the usual street scene. Many researchers believe that Van Gogh actually created his own version of the image of the Last Supper.

Those who support this theory explain this possibility by the great religiosity of Van Gogh. Everyone also knows that Jesus spent his Last Supper with his twelve disciples.