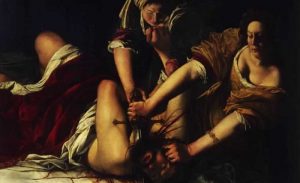 Typically, painters create paintings that you want to consider again and again, admiring the transmitted beauty on canvas. But not all canvases of outstanding artists evoke only positive emotions. In museum collections there are also such paintings, after viewing which simply the blood freezes in my veins and an unpleasant feeling of anxiety remains. This review contains the masterpieces of world painting, which cannot be looked at without a shudder.
Artemisia Gentileschi Judith Decapitating Holofernes

The painting “The Judith Decapitating Holofernes” conveys a biblical story in which a widow who seduced an Assyrian commander-invader kills him after bed comforts. For the Italian artist Artemisia Gentileschi, this canvas was the result of personal experiences. At the age of 18, she was dishonored by artist Agostino Tassi, who worked in her father’s workshop. The girl had to postpone a humiliating 7-month trial, after which she was forced to move from Rome to Florence, where she soon painted her famous painting.
Heinrich Fussley “Nightmare”

The French artist Gustav Moreau in his work often turned to a mythological theme. His painting “Diomedes devoured by his horses” serves as a reference to the 12 exploits of Hercules. The hero had to go to King Diomedes in Thrace to get the ferocious horses that the owner fed human meat. Hercules brutally cracked down on the king and left him to be torn to pieces by animals.
Jerome Bosch “Garden of Earthly Delights”

The triptych “Garden of Earthly Delights” is considered the most famous painting of Jerome Bosch. Its central part is dedicated to the sin of voluptuousness. A lot of rather strange images overwhelm the picture, as if warning the viewer about what could happen if you succumb to temptation.
Peter Paul Rubens “Saturn Devouring His Son”

The eerie canvas of Peter Paul Rubens conveys a mythological story about the god Saturn (in Greek mythology – Kronos), who was prophesied that one of his children would destroy his father. That is why Saturn devoured each of its offspring.
Hans Memling “Vanity of the Earth”

Not the most pleasant impression is caused by the left panel of the triptych “Vanity of the Earth”. On it, the author depicted his vision of hell. Looking at a terrible canvas, a man who lived several centuries ago had to think about a more righteous life, so as not to get into the infernal cauldron after death.
William Bouguereau “Dante and Virgil in Hell”

Starting to create his work “Dante and Virgil in Hell”, the French painter William Bouguereau was inspired by the poem “The Divine Comedy”. The action in the picture takes place in the 8th circle of hell, where counterfeiters and counterfeiters are serving their sentences. Damned souls and after death can not calm down, biting each other. Hypertrophic postures of sinners, muscle tension – all this is intended to convey to the viewer the fear and horror of what is happening.
Francisco Goya Disasters of War

Between the years 1810-1820, Francisco Goya created 82 engravings, later called “The Disasters of War.” In his works, the artist did not focus on the heroism of the commanders, but on the suffering of ordinary people. Goya intentionally performed the work in black and white so as not to “distract” the viewer from the basic idea that there was no excuse for war.

Francisco Goya for his frank work somehow even threatened to burn the Inquisition at the stake.