5 masterpieces of painting, which depict much more than the audience sees 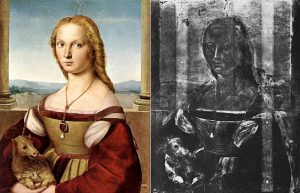 Considering the masterpieces of world painting, few people think that behind an idyllic landscape a portrait of a person can be hidden, and behind a drawn wave – a huge whale. Modern technologies and research methods allow us to find out what the artists portrayed initially. This review presents famous paintings that hide much more than the audience sees.
The Black Square K. Malevich

A sensational discovery was made a couple of years ago. On the occasion of the 100th anniversary of the creation of the famous “Black Square” by Kazimir Malevich, a series of manipulations were carried out on the painting, among which was the use of X-rays. The result of screening the canvas with UV rays surprised the researchers very much. It turns out that behind the black square hid two color images. One of them is a cubofuturistic composition, and the other is supermatic.

In addition, scientists were able to practically decipher the inscription in the picture. In their opinion, the canvas says: “The battle of blacks at night.” It can be assumed that such a name was a kind of response to the monochrome picture of the scandalous artist of that time, Alfons Alle. He painted a black rectangle and signed it, “The Battle of the Blacks in a Dark Cave in the Deep of the Night.” As for Malevich, he most likely did not immediately decide for himself what would happen in the end.
“Grass Flap” by Van Gogh

It is no secret that Vincent Van Gogh painted one on top of the other. The artist lived in great need, so he simply did not have the means to buy canvases. And yet, each time it is interesting to find out what was originally depicted in the picture.

So, when the painting “Grass Flap”, written in 1887, was illuminated with UV rays, a portrait of a peasant woman painted in dark colors was discovered under the upper layer of paint.
“Lady with the Unicorn” Raphael

No less interesting is the story of Raphael’s painting “A Lady with a Unicorn”. The artist painted it in 1506. Initially, it was a portrait of a girl holding a small dog. After the artist’s death, the dog was “turned” into a unicorn. Moreover, the painting began to be called “St. Catherine of Alexandria.” The girl’s shoulders were covered with a cloak and the attributes of the martyr were finished.

It is curious that restorers removed the finished layer and returned the portrait to its original appearance. They decided not to touch the dog, because its restoration could cause irreparable damage to the picture.
“Portrait of Don Ramon Satue” by Francisco Goya

In 1823, Francisco Goya painted a portrait of his friend Judge Ramon Satue. After appropriate x-ray analysis and scanning, scientists found that under the portrait is hidden the image of another man in a military uniform. Facial features are not drawn, so you can’t say with confidence who is in the picture.

If you pay attention to the uniform, then we can assume that the artist originally intended to paint a portrait of Joseph Bonaparte, brother of Napoleon Bonaparte, whom he appointed king of Spain. Then such a ceremonial uniform could only be worn by the king and his generals.

After the power of Joseph Bonaparte was overthrown, Francisco Goya was afraid to finish the portrait of the disgraced king. Therefore, he painted over the painting and painted on top of it a portrait of his don Ramon Satue.
“View of the Scheveningen sands”, Hendrick van Antonissen

The painting by the Dutch artist Hendrick van Antonissen “View of the Sands of Scheveningen” depicts a crowd of people gathered for no apparent reason on the ocean. The marine painter wrote it back in 1641. During restoration work on the canvas, which is stored in the Fitzwilliam Museum, an unusual spot was noticed. It turned out to be a huge shaded whale.

If we turn to the history of the period of the creation of the picture, then whales were often thrown to the shores of Scheveningen. Now it becomes clear why a crowd of people gathered on the shore on a cold winter day.

Studies of the canvas showed that they painted whale around the 18th-19th centuries. It is known that in 1873 the painting by Van Antonissen was transferred to the museum from the priest Edward Kerrich. Then the whale in the picture was gone. Perhaps someone inappropriately restored the canvas, and had to paint over the whale.