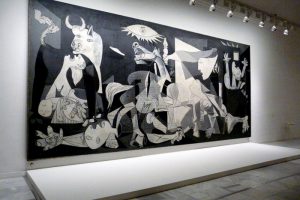 Before the invention of photography, People kept the memory of various historical events in the paintings. Such paintings often romanticized the struggle or presented various scenes in a distorted form to convey the horror experienced by our ancestors. Here are examples of the darkest and most disturbing paintings, which depict historical atrocities and disasters over the past 450 years. They perfectly reflect the horrors that happened many years ago.

1. Beating of infants (c. 1565-1567). Peter Brueghel the Elder
Bruegel, a Flemish Renaissance artist, based the plot of his painting on biblical history. The Jewish king Herod the Great, learning about the birth of a baby who will become the new king of ancient Israel and Judea, ordered to kill all the boys under the age of 2 years.

But instead of depicting Bethlehem, Brueghel painted a Dutch village, on the eve of the great uprising against Spanish rule, which lasted eighty years (from 1568 to 1648). Thus, for Brueghel, his fellow Dutchmen personify “innocent babies”, and the Spanish king Philip II – a new tyrant in the form of Herod.

2. Bartholomew’s night (c. 1572-84). Francois Dubois
At the same time as Dutch Protestants fought against Spanish Catholics, Protestants and Catholics clashed in France. The chaotic picture of Dubois depicts the massacre of French Catholics and Protestants in Paris and surrounding villages, which occurred on St. Bartholomew’s Day in 1572. During this massacre, which became one of the most brutal events of the Religious Wars in France (1562 – 1598), between 5,000 and 30,000 people were killed.

3. The execution of Charles I (1649). John Visop
Just a year after the end of the Thirty Years War in 1648, the English king was executed (one of the reasons was that he practiced Catholicism). The picture shows how, during the bloody scene of beheading the king, the lady in the foreground loses consciousness. What makes this scene especially terrible is what it meant to European monarchs. This made them understand that they could also be executed if they did not cooperate with their people. The picture perfectly shows how severe the consequences of such actions can be. It also became a gloomy portent of future events, since Karl was not the last European monarch to suffer such a fate. In fact, no matter how bloody the English revolution, the French revolution in the next century was much worse.

4. The death of Marat (1793). Jacques-Louis David
Most likely, everyone saw this image in history books, in the chapter on the French Revolution. Marat, the so-called “friend of the people”, was in fact a bloodthirsty revolutionary. To stop him, noblewoman Charlotte Corde decided to kill the leader of the Jacobins. Marat had a skin disease due to which he spent a lot of time in the bath. When Corday stated that she knew about the plot against the revolutionary government and wanted to talk about it, Marat invited her home while he was taking one of his many baths. It was a fatal decision, since Charlotte stabbed him with a knife.

5. Bonaparte near plague patients in Jaffa (1804). Antoine Jean Grou
As if Napoleon had little stubborn resistance from the Ottomans and the British in the Middle East, he also had to fight the demoralizing outbreak of the bubonic plague. This painting depicts Napoleon trying to inspire his soldiers suffering from an illness. This campaign ended badly for the French, as Napoleon ultimately left his army and returned to France. In the picture of Antoine-Jean Gros, French soldiers are clearly depicted as victims, unlike other paintings of that era.

6. The third of May 1808 in Madrid (1814). Francisco Goya
Unlike the English Revolution, the French Revolution dragged on and therefore during it the power changed repeatedly. In the end, Napoleon seized power and became the French emperor. He also put his brother on the throne of Spain. Not surprisingly, the Spaniards were not enthusiastic about foreign occupation and resisted the French invasion. The image above shows an unarmed, Christ-like Spaniard whom French soldiers shoot together with other civilians.

7. The raft of Medusa (1818–1819). Theodore Gericault
In 1816, the French frigate Medusa ran aground off the African coast. The captain and officers boarded the lifeboats, and for the remaining 147 people built a raft, which these boats had to tow to the shore. A storm arose and people in boats, fearing that panicky sailors would try to get into boats and drown them, cut the tow cables, leaving the raft to their fate.