People-birds, beautiful ladies and the joy of life 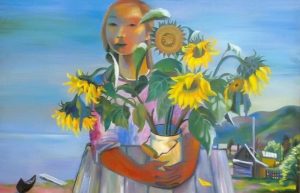 They worked in the harsh conditions of socialist realism, but paintings with farmers and tractors are not their style. Their paintings were crushed by bulldozers, not allowed to go to exhibitions, forgotten for many years. Some of them were lucky, and they received professional recognition, participation in exhibitions, posters mentioning their names … but few today remember their work. Artists of the Soviet era combined art and family – or preferred the workshop to a family hearth, searched for their own path, fought, dreamed … and, of course, did it.

Alexandra Beltsova was born in Latvia. During the years of training, she met the artist Roman Suta, who became her husband and associate. Together they traveled to Berlin, where they met many avant-garde artists, and to Paris, where they participated in exhibitions along with Picasso and Le Corbusier.

At this time, Alexandra’s work is close to cubism – geometric shapes, dry colors, hard lines. She portrayed women of her time and circle, strong, athletic, fatal.

In 1924, together with her husband and several colleagues, she founded a porcelain painting workshop, and a considerable part of Alexandra’s heritage is decorative plates with oriental and Latvian motifs.

Alexandra was in fragile health: tuberculosis undermined strength. During the exacerbation, she painted many portraits and self-portraits in which she seemed to be in a hurry to capture her appearance and images of the patients of the clinic where she was being treated. Melancholy and sad, they are imbued with a premonition of imminent death.

However, Alexander was waiting for a long and fruitful life, she tried new styles and new techniques, experimented with pastels and watercolors. Her family life was not easy. Roman Suta did not believe in the giftedness of his wife, believed that women were incapable of creativity, harshly criticized her work, and sometimes it was unbearable for Alexandra. In 1944, Roman Suta was repressed and shot, but Alexandra was lucky – she lived safely in Riga until the end of her life, wrote and actively participated in exhibitions.

Alla Tsybikova is the famous artist of Buryatia. And all her work is devoted to the traditional culture of her native land. Her work was distinguished by a subtle, shimmering color and unique style – Buddhist art meets avant-garde. Family, national traditions, everyday scenes are Tsybikova’s favorite topics.

The repeating motives of her work are birds with female and children’s heads, masks of the mystery Tsam, Buddhist goddesses.

She was a very modest and self-critical person, exhibited little and rarely, not counting her work worthy of attention, she suffered that she could not fully express her thoughts and ideas on canvas and wood. The title of Honored Artist of Russia was awarded to her posthumously.

Large canvases, covered with nothing like spots and lines, caused misunderstanding among the first persons of the state. Khrushchev’s “criticism” was obscene at all. The works of Vera and her associates were removed from the exhibitions and seized by the police, the exhibitions had to be held in apartments and workshops.

The same age as Vera Preobrazhenskaya awaited worldwide recognition of her work. She died in 2017, becoming a true legend of contemporary Russian art.

Gayane always signed her works only in Armenian. The small money that she received from the sale of paintings, the artist passed on to needy families.

Dying in a cancer hospital, suffering terribly, Gayane lamented how little she had managed to tell about her world, and that her paintings were not good enough. She did not have any descendants – neither children, nor students.
Maya Kopyttseva

Artist Maya Kopyttseva lived a long and prosperous life. Born in Abkhazia, raised in Leningrad, where she studied with well-known teachers throughout the country. She managed to leave Leningrad during the blockade together with students of the art school, and she spent the difficult years for the country in Samarkand, where she still had the opportunity to engage in creativity.