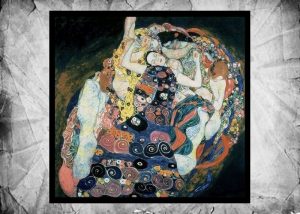 The popularity of Gustav Klimt can be envied by any artist and any man. It is safe to say that Gustav Klimt lived a happy life. From childhood, he was engaged in his favorite business and experienced a rapid rise in popularity even before he turned 20. He never needed money, and at the same time, he was extremely picky in choosing orders. In addition, the artist was always surrounded by enthusiastic fans, beloved women and young colleagues who idolized him. His paintings are now considered recognized masterpieces, sold for astronomical amounts.

So what god did this amazing charismatic man bring gifts to, so that fate favored him? The secret is pretty simple. Klimt loved women, loved and idolized, devoting almost all his work to them, transferring this love to paintings that reflected this love, admiration. His paintings, written by a peculiar author’s technique, looked like beautiful Byzantine murals and icons more than just portraits or just paintings.

Klimt subtly transferred ephemeral, almost inconceivable passion and physical eroticism to the canvas, his women – goddesses with a halo, in magic clothes or without them at all, are covered with layers of real gold leaf (the unique composition and technique of which has not yet been studied), richly inlaid with stones , framed by bizarre graceful ligature and floral ornament.

They say that at first he painted a naked female figure in the picture, and then “dressed” her in dresses. Magnificent forms that in life would not even look like retouching in photographs, loose hair, extraordinarily transformed by passion and mysterious magnetism of the face of half-goddesses, half-women, carefully painted bodies and genitals that did not look, went, but rather bizarre – it’s all unusual Klimt.

The one who devoted himself to serving the goddess feminine and who only benefited from this worship, for it is not shameful and does not show male weakness, but only that the man is so self-sufficient and courageous that his gifts were favorably received. Hence the frenzied popularity among women, and the extraordinary popularity in orders (after all, every woman would like to see herself as a goddess).

For a conservative Vienna, many of his works were scandalous, but this was what the public secretly wanted, since his “Byzantine female icons” were extremely popular. The first exhibition in 1989 caused tremendous excitement: exalted ladies fainted, the impressionists and modernists were delighted, the conservatives seriously discussed the psychic usefulness of the author, offering to put him in prison or to be sent out of the country.

All paintings were sold out;) People bought a dream. People bought goddesses. Generous gilding, rich colors, clear details. A striking and delightful look. Divine. Despite the caustic comments and ridicule of critics, Klimt until his death remained a favorite of the public, who willingly bought up his paintings.

In conclusion, I would like to add that, despite numerous connections, only two women existed in Klimt’s life. This is his mother – Anna Klimt, who completely devoted her life to her son and whom he loved and idolized until his death, and the wife of his late brother – Emilia Flöge, with whom he lived his whole remaining life, spending all his free time with her, taking on taking care of her and her children, without compromising by posting relations with her in any way and maintaining close friendship until death.) – Maybe this should not be included? ..

Today, the love story of Gustav Klimt and Emilia Flöge, about which they speak, is of interest – love is a dependence on which even Freud did not save.