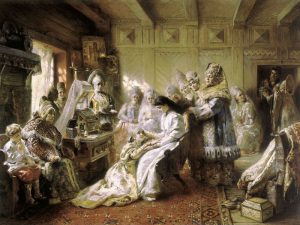 The conventional wisdom that talent should be hungry was clearly not related to Konstantin Egorovich Makovsky. At the end of the 19th century, he was probably one of the most successful and sought-after masters in Russia. Given his incredible creative fecundity and high speed, the artist very quickly became one of the best-selling. At the same time, the master was able to show the businessman’s talent. Incredibly raising the prices of his canvases, he undoubtedly won on this. To get a portrait of Makovsky’s brush became for many a matter of prestige, which the artist later successfully used.

The results of this approach, by the way, are still “audible” to us. So, for example, Makovsky’s works are not so much stored today in the Tretyakov Gallery. The reason is very simple: the famous collector
He considered the prices for the paintings of this master to be very high and was in no hurry to lay out sky-high sums for his masterpieces. In some cases, he simply could not do this – there was not enough money, even if there was a desire. So, for example, it happened with the famous painting “Boyarsky wedding feast”. Pavel Tretyakov could not buy it, since the price of 20 thousand rubles was too high for him, and as a result, the picture was in America. Jeweler Charles Schumann bought it for 15 thousand dollars (which, incidentally, corresponded to 60 thousand rubles) and put it in the window of his store on Broadway. The picture made a real sensation, probably all but our country benefited from it – the artist received fabulous money, Schumann was able to “recapture” the costs by attracting a lot of visitors and issuing postcards with a masterpiece in a new “American style” for Americans. Upon learning of his unexpected popularity overseas, Konstantin Makovsky decided at the turn of the century to make a trip to America.

On October 31, 1901, the artist and his wife departed for the United States. He brought with him several dozen paintings for the exhibition, which was to be shown in several cities. These plans were not destined to come true due to customs troubles, but the name of Makovsky was already quite well known in America. The press of those years wrote that the famous Russian artist immediately after arrival began to receive orders for portraits. America of the “gilded age” with the economy developing after the war and the violent desire of the nouveau riche to join the cultural traditions was for Makovsky a great field for activity. It is not known exactly how many paintings he wrote for this trip, but, knowing his rather high speed of work, we can assume that more than a dozen. Most likely, most of these masterpieces are still kept in private collections by the descendants of their customers. In an interview given to the Petersburg newspaper upon returning home, the artist complained about the conservatism and intransigence of the Americans, who categorically refused to provide these portraits for display in Russia.

And so, at the end of 1901, Makovsky was approaching the main goal of his creative and working trip. He is introduced to US President Theodore Roosevelt. After a visit to the White House, the artist begins preparations for work on the portrait of the president. I must say that for Roosevelt this canvas was the first full-length portrait as the head of the country. Moreover, it is not clear how the Americans subsequently reacted to this work.

Work on the portrait was difficult; the conditions were far from ideal. The artist painted the president’s head from life, but in fits and starts, directly in the office of the White House. And he completed the rest of the work, focusing on photographs and, possibly, some things provided by Roosevelt. However, the order was completed in a few weeks, and already in the early days of January 1902, the portrait was put on public display. Criticism gave him very high marks.

Solved in a classic realistic manner, the portrait really liked the public. However, today we can only judge it by the few surviving newspaper photographs. The fact is that in subsequent years the portrait simply disappeared. The version that he was sold in private hands seems very doubtful. It is possible that the canvas was destroyed during a fire in the White House in 1929 (then the Western wing and the Oval Office were almost completely burned out), or maybe it was simply put into storage rooms due to the political situation with Russia that soon worsened. In any case, the place of the presidential portrait was soon occupied by new work. This time Roosevelt wrote an American artist, also known throughout the world, John Singer Sargent.