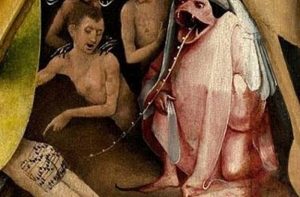 Different people perceive works of art differently, and the viewer’s point of view can radically differ from what the artist himself put into his work. And many famous paintings have interesting stories that allow you to look at a picture or sculpture from a completely new perspective.

1. Manneken Pis
Those who have ever been to Brussels must have seen one of Belgium’s most notable attractions – the Manneken Pis sculpture. As the name suggests, she portrays a little boy pissing in a fountain. Archival records show that the original sculpture was installed in 1388. Then it was a stone statue that served as a public fountain, but it was either destroyed or stolen at some point. The “Manneken Pis” in its current form was designed and installed by the Flemish sculptor Jerome Duchenoy in 1619. There are many legends about the origin of the sculpture.

The most famous of them tells of a little boy who saved Brussels when the city was under siege. He did this by urinating on a burning wick when the enemy tried to blow up the city walls. Another legend says that in fact the statue depicts the Duke of Gottfried III, Earl of Louvain, at the age of two. According to the story, during the battle, his soldiers put the boy in a basket, which they hung on a tree. From there, Gottfried urinated on the enemy, who eventually lost the battle.

Currently, the statue is one of the main tourist attractions of the city, and you can often see how the Manneken Pis is dressed in a costume. This is because since the 18th century there is a tradition of dressing the statue in fashionable clothes. Her wardrobe currently consists of over 900 costumes.

2. The garden of earthly pleasures. Jerome Bosch
The Garden of Earthly Delights is one of the most complex and ambitious paintings in history. Technically, this is a triptych (three separate panels), written by the Dutch master Jerome Bosch between 1490 and 1510. The left panel shows Adam and Eve in the Garden of Eden. The middle panel shows a rich panorama filled with many characters, both people and animals. The right panel shows a dark hellish world. At first glance, Bosch quite clearly portrayed heaven, earth and hell, perhaps even as a warning against all the temptations of life.

At least that is what most art critics think, but Bosch’s work is so full of complex and abstract images that even 600 years later, people still discover something new in his painting. For example, music plays a large role in the triptych, and it depicts numerous characters playing musical instruments in non-traditional ways (for example, flutes inserted between the buttocks). The musicologists at Oxford recreated some of the instruments depicted in the picture and tried to play them, but found that they sound terrible. Just recently, researchers found that one of the characters on the hell panel printed notes at its fifth point. They were deciphered and recorded “600-year-old song of an ass from hell.”

3. Tapestry from Bayeux
The Bayeux tapestry is one of the most important artifacts that have survived since the Middle Ages. This is a 230-meter canvas with 50 scenes embroidered depicting the battle between William the Conqueror and King Harold during the Norman invasion. Despite the fact that the tapestry is more than 900 years old, it is still in excellent condition, although the last part is clearly missing. To be pedantic, a Bayeux tapestry is technically not a tapestry. This is embroidery, which, although similar to a tapestry, uses a different technique. The threads are sewn into the main fabric, forming images, and not woven on a loom.

The old story that the tapestry was made by nuns all over England and then sewn together also seems unlikely. Modern experts believe that although the characters in many scenes look different, the embroidery technique remains unchanged. This led them to conclude that the tapestry was probably made by a team of experienced seamstresses. The biggest mystery associated with the tapestry remains its origin. Wilhelm’s brother, Bishop Odo, has long been considered the most likely “candidate” for a tapestry customer. However, according to a recent theory, perhaps Edith Godvinson, the sister of the vanquished Harold, similarly tried to win favor with the new king.