10 contemporary blind artists who surprised the world with their artIt will not be a revelation to anyone that painting is an exclusively visual form of art, therefore the phrase “blind artist” itself sounds like nonsense. But in fact, there…

The dramatic fate of Princess Tenisheva 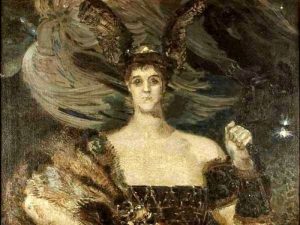 June 1 (old style – May 20) marks the 150th anniversary of the birth of an outstanding woman whose contribution to the development of Russian culture can hardly be overestimated. Princess Maria Tenisheva was a collector, philanthropist, public figure and enamel artist. Turgenev regretted not having time to write a story about her, she posed for Repin, Serov, Korovin and Vrubel. Contemporaries called her “the heroine of our time” and “the pride of all of Russia,” and today, her name is hardly known to the majority and undeservedly forgotten.

Maria Klavdievna Tenisheva, nee Pyatkovskaya, was born into a noble family, but was illegitimate. According to rumors, her father could be Emperor Alexander II. Her mother married after her birth, and therefore her stepfather’s family was not recognized. Mary did not need anything, but was completely left to herself. Later, in her memoirs, she wrote: “I was alone, abandoned. When everything was quiet in the house, I inaudibly tiptoed my way into the living room, leaving my shoes behind the door. There are my friends, pictures … “.

After graduating from high school, Maria married the lawyer Rafail Nikolaev and gave birth to a daughter, but was not happy in marriage, because the couple did not love each other. Later, Maria called this marriage “stuffy shell”, because “everything was so gray, ordinary, empty”. The husband was indifferent to everything in the world, except for playing cards. After 5 years, Maria sold part of the furniture and went abroad with her daughter with the proceeds.

In Paris, she began attending a vocal school, discovering a mezzo-soprano of rare beauty. Her mentor predicted her career as an opera singer, but Maria decided that the stage was not for her: “Singing? This is fun … Not what my destiny wants. ” Abroad, she also took art classes, spent a lot of time in museums and behind books.

A year later, Maria returned to Russia. The husband selected the daughter, giving her to a closed educational institution, and spoke contemptuously about the creative successes of his wife: “I do not want posters to rub my name on fences!” And the daughter gradually moved away from her mother, never forgiving her for deciding to leave the family in the name of self-realization.

In difficult times, a childhood friend came to the rescue – Ekaterina Svyatopolk-Chetvertinskaya, who invited her to her family estate Talashkino. Since then, Mary’s life has changed dramatically. There she met Prince Vyacheslav Tenishev – an entrepreneur, philanthropist and public figure. Despite the significant difference in age, they felt soul mates in each other and soon got married.

Together with her husband, the princess moved to Bezhetsk, where Tenishev had a large plant. Maria Klavdievna became the trustee of the local school, then founded several more schools, organized a public canteen and a theater, opened craft schools for working children. Later, the family moved to St. Petersburg, where a music salon was organized in the Tenishevs’ house, in which famous composers visited.

On the advice of Ilya Repin, Tenisheva opened a studio-studio where students were prepared for admission to the Academy of Arts. The princess also became a co-founder of the magazine “World of Art”, sponsoring the exhibitions of the artists of the world. In parallel, she took up collecting, the princess later transferred many of the paintings to the Russian Museum. In 1893, she acquired the estate in Talashkino and turned it into a cultural center, not inferior to the workshops in Abramtsevo. There were Repin, Bakst, Vrubel, Serov and other famous artists.
At the Flenovo farm near Talashkino, the princess opened a school for village children, where the best teachers taught. A new school and a number of educational and economic workshops were opened in Talashkino. They were engaged in woodworking, stamping for metal, ceramics, embroidery, etc. Orders for the works of Talashkin craftsmen came even from abroad. The princess was carried away by enamel and spent all day in the workshop, igniting the idea of ​​reviving the enamel business. Her works were exhibited abroad and enjoyed great success.

In 1903, the husband of Tenisheva died, and soon all of her beloved offspring died. After the revolution, life in the “Russian Athens”, as they called Talashkino, ceased. Potatoes were stored in the church built by the princess and painted by Roerich, the tomb of Tenishev was ruined, the workshops were closed. She wrote about these days: “There is no doubt, it was a spontaneous storm flying over Russia. Blind, unscrupulous people … These are those who advocate for the people, shout about the good of the people – and destroy with a light heart that little, those rare foci of culture that are created by the single heavy efforts of individuals. ”
In 1919, the princess had to leave the country. She spent the last years of her life in exile, continuing to work on enamels, despite a serious illness.