10 contemporary blind artists who surprised the world with their art 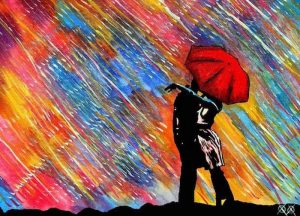 It will not be a revelation to anyone that painting is an exclusively visual form of art, therefore the phrase “blind artist” itself sounds like nonsense. But in fact, there are amazing people who are actually blind (they have eyesight, but not enough for certain types of activities), but at the same time they wrote stunningly beautiful paintings that can compete with the works of sighted artists.

Michael Williams was born in the American city of Memphis in 1964. For the first time, a boy became interested in art, watching his mother (who was an artist) paint a cowboy leaving for sunset. Williams then began to learn to draw himself, but as a teenager he was diagnosed with Stargardt’s disease, which is a degenerative disease that affects people under the age of 20 and affects their eyesight. Despite losing most of his vision, Williams continued to paint and won many high school awards.

To paint, Williams uses a powerful magnifying glass and leans close to the canvas. Since he is having trouble defining a range of shades and colors, most of the time the artist is forced to improvise. Williams spends about two weeks to a year on each painting.

You can draw in different ways, but very few people think that someone who uses Microsoft Paint can be called an artist. But what can you call Hal Lasko, who did wonderful works of art with the help of this particular program. But even more impressive work Lasko makes another fact. When he created stunning paintings in Paint (late 80s – 90s), the artist was legally blind.

Lasko was born in 1915, and after World War II, he began working as a graphic designer before taking up topography. In 2000, Lasko’s grandson showed him Microsoft Paint on a computer that his grandfather bought for his 85th birthday.

In 2005, Lasko partially lost his sight due to age-related macular degeneration, which leads to a deterioration in central vision. After that, he could see everything only with peripheral vision, out of the corner of his eye. He said that Paint allowed him to enlarge images so that he could see them, so he painted his masterpieces pixel by pixel.

3. Keith Salmon
Keith Salmon was born in Essex, UK, and after graduating from university he worked as a sculptor and artist for several years. In 1989, he was diagnosed with diabetic retinopathy, and his eyesight began to deteriorate rapidly, eventually leading to legal blindness. This would be the end of a career for many other artists, but not for Salmon.

What is especially impressive, now the artist paints landscapes that he cannot see. Salmon, who was an active climber and traveler before going blind, continues to hike the UK hills, and then draws what he once saw, combines this with what he feels now.

In the late 1960s, Arthur Ellis was a student in the art department and received a degree in fine art. He moved to London and tried to make a career there before returning to his hometown of Tunbridge Wells. There he worked as a full-time printer, and in his free time he painted and made sculptures, thinking that one day he would become a real artist. So 26 years have passed. In 2006, Ellis went to the doctor complaining of an earache. It quickly became clear that Ellis had meningitis, and he was immediately hospitalized and fell into a coma.

The Ellis family was told that the worst could be expected, including damage to the brain and vital functions. Ellis survived, but lost his sight and hearing. Nevertheless, returning home, he decided to continue painting. Through trial and error, he created a technique in which he uses a plasticine-like sticky mass to outline the lines of a picture. He then uses a tool similar to a barcode scanner, which determines the color of the paint. Ellis also suffers from Charles Bonnet syndrome, which is a condition in which blind people experience vivid and recurring visual hallucinations. Curiously, the artist includes these hallucinations in his works.

5. Sergey Popolzin
Sergei Popolzin was born in Russia in 1964, grew up in Siberia and studied at an art school in his youth. Due to a number of personal problems and military service, he never finished training. After this, Popolzin had a stormy life, and in 1990 he tried to commit suicide. Sergei survived, but received a serious head injury, which led to blindness.

While he was recovering, Popolzin began to learn to draw. For orientation, he sticks pins into the canvas. Popolzin says that the most difficult thing in painting is to keep the image in your head from the first brush stroke to the very end.

Binod Bihari Mukherjee was born in 1904 in India and from birth was blind in one eye and the other was shortsighted. Unable to go to a regular school due to impaired vision.

10 contemporary blind artists who surprised the world with their artIt will not be a revelation to anyone that painting is an exclusively visual form of art, therefore the phrase “blind artist” itself sounds like nonsense. But in fact, there…