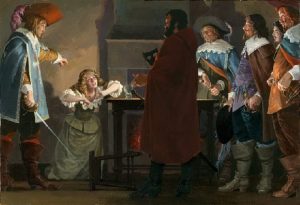 Many in adolescence were read by the works of Alexander Dumas, and especially the novel “Three Musketeers”, filled with adventures and historical events of 1625-1628, as well as entertaining illustrations. Next year, the novel will celebrate 175 years, during which artists from different countries have repeatedly illustrated it. One of the best publications is considered an anniversary edition – to the 50th anniversary of the novel with masterpiece illustrations by the French artist Maurice Leloir. But after so many years, contemporary artists also do not bypass the immortal creation of Alexander Dumas. END_OF_DOCUMENT_TOKEN_TO_BE_REPLACED